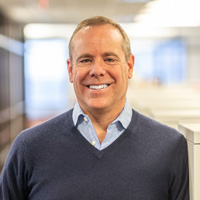 Brian Lawlor is president of local media for The E.W. Scripps Company. In addition to the company’s 52 television stations, he also has responsibility for the local digital operations, Scripps local programming initiatives and the five Katz multicast networks. Since assuming his current role in 2009, Brian has overseen the rapid growth of our broadcasting assets from 10 TV stations in 2009 to our current portfolio which makes Scripps one of the largest independent owner of TV stations in the country. As a highly respected member of the television community, Brian was named "Broadcaster of the Year" in 2012 by Broadcasting and Cable Magazine. He was also named one of the “80 Most Influential People in Television.” He has been the driving force in the successful launch of Scripps national programming, which includes “Right This Minute” and “The List.” Brian is currently the chairman of the ABC Board of Governors and a board member of the Broadcasters Foundation of America. He serves on the advisory board of the Howard Center for Investigative Journalism at the Walter Cronkite School of Mass Communication at Arizona State University. He is the former television board chairman for the National Association of Broadcasters. He also previously served as the president and chairman of the NBC Affiliates Board. Brian holds a bachelor's degree from King's College and an MBA from the University of Miami, Florida.